Practical Farm Ideas reaches 25 years, and it's a real feeling of achievement.

Those years have not been without incident, yet the publication never missed a deadline, has always been the the right number of pages (44 for the first ten years or so, and then 48), has had a loyal and growing readership. It has had no subsidy or support, official or commercial, but relied entirely on the income from readers. Just like a Penguin book. Each issue has had more plaudits than critics, and more so since the start of the Soil+ cover cropping section. 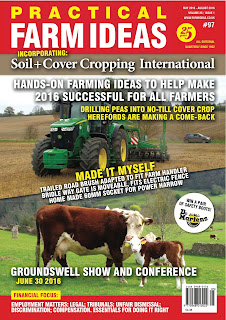 'Made it Myself remains the bulk of pages

Over the years a number of readers have said the smaller tips and ideas we put in each issue are really valuable. They'll be happy with this issue, even though, like many impressionable teenagers, I have a fascination with the huge projects, like the home-built self propelled six row potato harvester based on a pea viner which we featured in Vol 1 - 3 Autumn 1992, or, later on, a self propelled Hesston baler.

Ifor Williams jack: A puncture on the trailer can wreck the day. If you have a functioning spare, do you have a jack - and the spanner - to fix on the roadside? So often it's a equation of leaving it on the roadside, or calling out the tyre fitters. So a standard scissor jack from a large car modified to fit an Ifor Williams chassis makes a lot of sense. It's small, can be stowed under the trailer floor or in the truck. Making it fit the trailer is not too difficult - the pictures provide a design detail that works.

Trailed road brush gets front mounted: Mud on roads is a constant problem for farmers, and motorists. This trailed, ground wheel driven brush worked well, but tied up a tractor when there wasn't one spare. Modifying it to go on the front of a handler, and remaining wheel driven, has meant cleaner roads around the Kent lanes where the job was done. He bought the trailed brush for £150 in a sale. Nobody wants ground drive today, preferring hydraulic and small caster wheels - which puncture.

Need a 60mm socket? Then make one! Fixing his power harrow meant undoing the 60mm bolts which go up through each rotor, and there was nothing like a 60mm socket in the tool kit. Using a scrap bolt as a form he fashioned some heated steel plate around the hex and welded it together. Having removed the form he welded a plate on the top with a nut that fitted a socket in the toolkit. The job worked. I thought of wheel hub dustups, the big nut in the Zetor oil filter that gets undone with a chisel, and there are many more.

The EU debate:  a useful trip to Brussels as part of a select agri journalist group from across the EU was memorable.  We were there just before their airport was bombed, and there was high security already in place. We saw all three sections, the commission which introduces ideas for new initiatives as well as laws, the council which considers them in greater depth and involves all members, and the parliament where the issues are debated. UK farmers are wanting out, according to a Farmers Weekly survey. There's a lot which is wrong, sure, but the UK also seems to want to keep its distance, which is not a good approach in any club or society. We could, I am certain, have greater influence if we participated a bit more, in the areas where we are active. It was good to get a page on the visit in this issue of PFI.

Finally, for all who need a new pair of workbooks, there a competition with three winners each who will get a pair of Dr Martens work boots. I tried a pair in the shop, and they make the ones I've been using for years feel very uncomfortable. So have a go - details are on the back page.