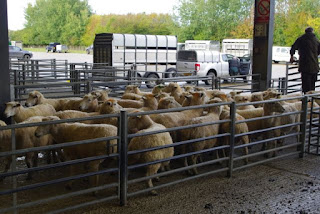 Farmers who use marts might be asking what the near future holds, and so I asked the NFU what their take was on the marts remaining open. Their reply seems as if they are expecting life to stay as normal.

“So auction marts movements shouldn’t be disrupted but obviously we’re now being told to avoid busy public places – we’re just advising farm businesses to take the lead from the advice that’s given by the authorities.”

was the response from their press office. If the advice changes the result would be considerable. Video auctions are a likely substitute, conducted by existing companies and new ones.

In the past couple of days we hear that two marts in N Ireland; Saitfield in Co Down and Armoy on Co Antrim have stopped sales “with immediate effect” on Mar 16, “in the interest of health and safety of our customers and staff… their health is our main priority” In NI the mart at Ballymena is having a normal sales calendar in line with government recommendations.

Buyers and farmers wanting to move stock on before spring are making marts very active. While marts in England, Wales and Scotland are continuing to trade, all are restricting visitors to those directly involved buying and selling. Like many marts, Melton Mowbray has spread its wings to hosting various food fairs, sales of all kinds, including fur and feather, and even weddings, and these are all cancelled. Concern about closure might have contributed to their busiest day ever with 650 cattle and 4,500 sheep. 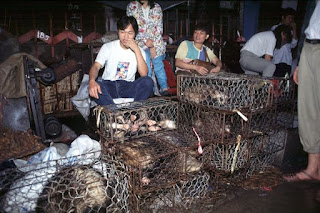 UK livestock marts need to be concerned because it's the markets in China which have been fingered as the source of the coronavirus disease. In Wuhan bats and snakes are possible culprits. The markets sell a wide variety of live animals which are bought for immediate slaughter and consumption. Numerous species in cramped conditions are good for viruses to mutate.

China has been the source of many zoonotic disease outbreaks, where a virus jumps from animals to humans. The growing popularity of wild animals for food is barely regulated in China and other parts of Asia. They are brought in from the forest and there is no regulation. Poor regulation in markets means that diseased animals are penned in close proximity to healthy ones of different species. At a recent conference former WHO specialist Dr Jonathan Quick said “When you have this viral soup and you have a collection of pigs, poultry and bats, such as in the Wuhan mart, you have a perfect incubator for novel disease.”

Posted by farmideas at 6:28 pm