Numbers of farmers in the dairy sector face a tough winter, and the shortage of fodder and bedding for their stock will only add to their troubles. The article suggests that the situation could be helped if those farmers growing crops would bale more of their straw, and even bale straw from oil seed rape. In this way farmers can be seen to be working together.
To the arable farmer the straw from his crops of wheat, barley and rape is often a minor headache. He wants the field cleared to get in with the cultivator. Chopping and spreading adds some nutrient and saves some fertiliser, and means the next task can be done directly. Baling straw spells delay, albeit  some extra income. The bigger the corn acreage the greater the headache created by straw.
To the livestock man, straw adds fibre to the diet, and makes the silage go further. It keeps livestock clean, helps reduce disease, is 'inspector friendly'. Buying, and paying for it is also a headache, particularly in years like this when supplies are tight and prices sky high.
Farming unions and other groups should be able to help pull the two sides together, though ultimately the decider is, of course, the costs and returns. It's not just a job for the farming unions, there are machinery rings and agricultural societies which can do their bit as well, and magazines and the media can play their part too.
Baling rape straw is not as daft as it sounds
Promoting the use of alternatives to wheat and barley straw is another useful activity. Oil seed rape straw is routinely chopped and incorporated, but some farmers have experimented with using it for bedding with considerable success. OSR straw has its problems: it can be too green and sappy for baling and so many agress it is best got rid of by chopping and spreading on the field; unlike barley straw it has no feed value so not worth the bother; as a bedding material it remains an unknown quantity for many farmers.
Yet some livestock farmers have found it a good substitute, and some mixed farms manage the job of baling so it is usable in the winter as bedding. Rape straw can also be used in cattle rations made in a mixer wagon, and Jennifer Picken, ruminant nutritionist at Keenan systems, says it helps maximise the feeding value of silage - something which is all important for dairy farmers this year.  Don't use too much and mix it well, is the advice. Rape straw is best as feed when not too stemmy and baled dry. These qualities are less important when the straw is  used as bedding.
Baled rape straw can also be useful as fuel in a big bale incinerator.
Another alternative are rushes. One Practical Farm Ideas contributor cuts and bales the rushes on his low lying wet land and saves £60 on the cost of wintering each bullock. Instead of using the topper he mows, turns if necessary, and then round bales the 'crop', which provides the cattle with good aftermath grazing - all the better for having the trash removed.
These are positive practical ideas which can be implemented by the farming community.
With the rising price, and shortage of inputs, NFU Cwmru calls for a 26% rise in the price of milk, from the present 26p average to 33p a litre. David James who chairs the Pembrokeshire NFU says feed prices have risen sharply, with compound feed some 30% over last year, ammonium nitrate up 50 % and fuel 25%, while the price of milk at the farm gate has lifted just 11%.  A number of farmers are going to find forage supplies tight this year, though not all is grim news as silage quality is good.
Hoping for a price increase is no way to plan the future of the business. In love, war, and farming, there's always the need for action as well as hope. When unions join together to promote action which results in one farmer helping another - even if there's no profit in it - there's evidence that all are trying to resolve a problem. This is surely feasible when it comes to straw. For while arable farmers keep the straw choppers going, livestock men are wondering where on earth they are going to get supplies.
Providing practical help for the sector under pressure underlines the urgent need for economic action, and shows that the farming industry as a whole is ' doing all we can to help'.
Posted by farmideas at 12:35 pm 1 comment:

The future of the small family farm

The future of the small family farm
Defra's interest in exploring how agricultural tenancies can be made more competitive and supportive of people entering farming might be seen as more political than practical. A reduction in the number of farming holdings has significant benefits for government. Small farms make up a significant and deserving section of the rural poor, they use technology and methods which are out-dated and thus often less environmentally friendly, they have poor records and management systems. They are often involved in the supply of goods, such as eggs and vegetables, direct to the consumer, which requires difficult and expensive regulation.
Incomes of large farms are generally satisfactory and have fewer social issues. Large farms are easier to administer, and, being mainly concerned with the supply of commodities to the processing and supply trade, have appropriate inspections and regulation. Large farms have recording systems and are fully conversant with the various departments.
The disadvantage or risk of an industry made up of large farms is less obvious. However, they are less likely to pass on husbandry skills, as they increasingly rely on a workforce from outside the UK. They are more concerned with mono-culture and are less diversified in terms of enterprise and genetics. Large farms suit the supply of large retailers, but have difficulty in developing niche and high value products. Large farms are inflexible in operation, as investment and skills are contained in a limited and specialised area of farming.
Yet the evidence suggests that soil - the basis of all agriculture - is improved by mixed farming operations and is damaged by mono-culture.
Small farms have a long and healthy future in Britain. Their problems arise when they are managed as if they were large units - ie supplying commodities to processors like their larger counterparts, but in smaller quantities.
Excerpted from 'The Future for Small Family Farms' :  a talk by Mike Donovan, editor, Practical Farm Ideas.
Posted by farmideas at 4:57 pm No comments:

Protecting tractor glass from breaking
Have you noticed how big tractor cab windows have become? Not only are they an easy target for the wayward stone thrown up by the hedge trimmer, mower, tedder and other implements, they are expensive to repair. And when they shatter, the bang is quite frightening.
The new issue of Practical Farm Ideas shows how an inventive farmer has made clear plastic protectors - you can see through them but stones bounce off. They work so well he's making them for other farmers.
Cultivator modification has "transformed" the way it works
Arable farmers with the popular Kverneland CLC heavy cultivator or similar will be interested to see the benefits of replacing the depth wheels with a Simba type rear packer roller. The cultivator depth is better controlled, and the ground is compressed, holding in moisture.
Farm tax planning tips can save £thousands
Farming has returned to profit in some sections, yet many businesses do little if any tax planning. The Financial focus provides plenty to discuss with your accountant. Should the farm business be a Ltd? Should a new vehicle be bought by the company? Should my 25 y-old son be made a partner?
Sealed bearing
When a sealed bearing starts to grumble, there are many who think about puncturing the rubber seal and squirting in some grease. Here's a guy who has been doing this on his MF 520 disc harrow for years, and a twice a year greasing keeps them running silently.
Quick turn-around for seed drill
Filling the seed drill or ferti spreader in the field needs a loader or telehandler, plus the tractor and a trailer to carry the bags. That's a lot of machinery, some which might be used for other jobs. For the last 20 years our contributor tows a trailer with the seed or fertiliser tipped in loose and an auger driven from the tractor hydraulics, and fills the drill in minutes, with the amount he needs for the job.
'Helping farmers cut costs' has been the long term slogan for Practical Farm Ideas, and the new issue shows some 50 ways this can be achieved. The quarterly magazine has an annual subscription of £15.40 from www.farmideas.co.uk
Further information from Mike Donovan, editor  editor@farmideas.co.uk    T: 01994 240978 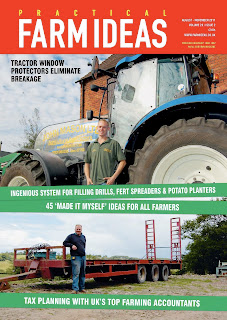 Posted by farmideas at 1:51 pm No comments: