Due to the dependence of UK farming on EU subsidies, the referendum is critical for the sector. Where is EU farm policy heading? Does the EU Commissioner have the appetite to help distressed sectors? Has he any further plans to provide relief?

The count-down to the EU referendum has begun and voters and politicians need to get real, put aside all the crazy facts and figures they have been throwing around, and make a serious assessment of what is round the corner - should we stay or should we go.

Farmers probably have the most to gain or lose from the decision, as half their income is through payments from Brussels.  They have more that's directly at stake than any other sector. The NHS isn't funded by the EU, and neither are schools. Farmers need leaders, analysts and the national media to get real with the topic and tell them the consequences of their vote. Politicians need to do the same. Empty promises and distorted facts put out to get votes are not satisfactory.

Last week I was in the Netherlands at the conferences and events surrounding the Dutch presidency of the Council, which gave me the chance to briefly meet Commissioner Hogan as well as ag ministers from other EU countries. He is enthusiastic for further CAP changes, even before the latest scheme has settled down. 'Innovation' was the word on his and other official lips, but nobody was prepared to define it. I mentioned the value of low tech but high return innovations but he gave me little more than a guffaw and a "try telling that to hi-tech Dutch farmers!" It seems to me he wants small farmers to have robots to milk cows and do other jobs.. so if you're a small farmer with new ideas, particularly any that involve electronics, you may be in luck! 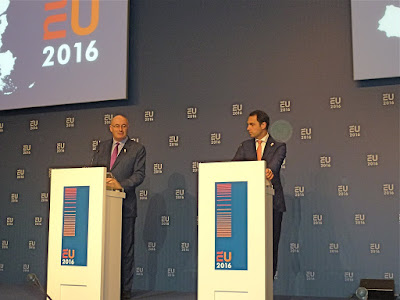 Commissioner Hogan implied the EU had done what it could over the current crisis in dairy and pigs. He said that 23 measures to assist the dairy sector had been put in place by the EU, yet 8 of the 28 countries had yet to implement them - all which indicated to him a lack of national concern. It sounds  significant, but there are obvious reasons why some countries would not bother. The dairy crisis is hardly going to effect Malta, or Luxembourg, or even Croatia and Cyprus. Other EU nations with suffering dairy farmers may well not have the administrative mechanisms to implement his 23 measures. The Commissioner provided an answer that may be satisfactory in political circles, but was not what any UK or elsewhere being paid a pittance for milk wanted to hear.

The EU makes national governments impotent to provide for their farmers

There is much which can be done at EU level to help the dairy sector, and in fact this is pretty much the only level which can provide help. The dominance of EU regulations makes national governments impotent in this crisis - other than supporting the farming charities which are asked to pick up the emotional pieces. Farmers with poor collateral - tenants, heavily mortgaged owner-occupiers - are finding it difficult to get medium term loans from their bankers.

Arrangement fees, surveys and relatively high interest rates put undue pressure on farmers who have been encouraged by the EU and national governments to turn on the milk taps. Many dairy farmers were rising to the challenge provided by the abolition of quotas together with generous targets provided by national governments. Farmers have risked their money on expansion on the basis of strong signals from governments.

It is also interesting to hear that 80% of Dutch dairy output is sold to Friesland Campagnia, a farmer's co-operative. UK milk marketing has been ravaged by 'EU regulations' and the result is chaos and miserable prices. The MMB was not acceptable to the EU.  Splitting it into regional businesses called Milk Marque was no good. Big plants, such as the one in Whitland, were closed - was this the EU, or other dairy companies wanting to reduce processing capacity, so screwing the farmers price a bit more? All was done with the approval of the great and good in UK farming. Dutch milk prices have been held up to around 24c, 20p/litre, a different league to what is paid to many in the UK.

At the press conference there was, as always, a choreographed procedure which allowed for minimal actual investigation - something which I and many other authorised journalists find frustrating. The 10-15 minutes allocated time passes with the Commissioner, and others on the podium (in this case the Dutch Minister) giving detailed answers to sometimes obscure questions. It's just what they like. The time soon passes and the slick MC in charge soon calls time and the big wigs file off stage. Which is where they get caught for 'off-the-record' statements. Does the Commissioner really have such a packed schedule that he can only take 15 minutes of press questions? Or is he following the performance of David Cameron who was spirited off the stage at the 2006 Royal Show, refusing to take a single question from the press?

More CAP changes likely even before the current ones get established

Farmers who believe the Basic Payment is secure for the next few years are likely to be disappointed. It will be chipped away, the conditions will become tougher. The sharper reduction in Basic Payment (Pillar 1) will be in favour of an adjusted Pillar 2 which will have not only further environmental incentives but also include payments for innovation and science, but no-where is this explained. The ministers, and us journos, were shown a high tech dairy making maximum use of robots but, after spending €1.3million, it was losing money. Then there was a factory farm growing herbs and tomatoes under artificial lighting from Philips, which was never a project that would fill supermarket shelves. Lastly there was a precision arable farmer who was working closely with Bayer.

Do these farms point the direction of farm innovation?  Are they projects which will attract EU subsidy? Will pillar 2 have grant payments for selected high tech improvements?

These official farm tours contrasted sharply with farm visits I made after other media went home. Here were farmers that are innovative in a practical way. They focussed on feeding with conventional mixer wagons measuring the value of all ingredients; good ventilation with adjustable curtains; clean water with innovative troughs; quality bedding; good foot management.  Their silage system is simple and low cost.

I came away with a quiver-full of innovations, not only for dairy but also some useful tips and ideas for arable as well. It was, furthermore, interesting to experience the attitude and stance of an EU Commissioner when on duty and faced with an audience who want to ask probing questions. The Commissioner is an unelected appointee for a term of five years that started in 2014. 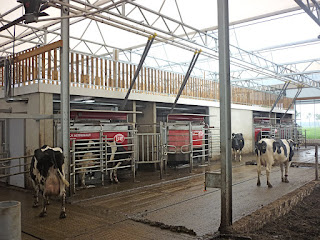 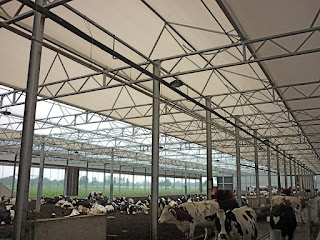 Innovation but no profit from this Dutch €1.3 million set-up. Is this the innovation which Commissioner Hogan is wanting to promote?

Practical Farm Ideas, now in its 25th year, is published quarterly. It carries no advertising and remains totally independent of government or other organisations. Issues focus on cost-cutting ideas devised by farmers in their workshops
Practical Farm Ideas (quarterly) Website ;   Subscribe for £16.50/year Click