Last week Theresa May did a major U-Turn. Her plans for elderly care, while clearly sensible in the eyes of many, including elderly home owners were going badly wrong and had been dubbed the ‘dementia tax’. The objectors won the day and so the PM, renowned for her tenacity, changed her policy. It was not worth the time and effort to tough out. The run up to polling day is a politically sensitive time when sectors dependent on government funding become vocal. There can, for example, be few hustings where health is not raised. Education, national security and care for the elderly are similar. If the promise is not in the manifesto the next best is to have one extracted on the Today programme.

Like health, the far sector relies on government funding, yet has remained strangely mute. It is also a sector that’s hugely affected by Brexit.  Half farm income comes from the EU. Sales of UK farm goods to the EU are protected. Brexit puts all these at risk.

Why has the NFU side-stepped the opportunity to force statements and decisions? Is their silence a reflection of their traditional loyalty to the Tories? Are they cowed by the fact that so many farmers voted to leave the EU? Farmers need to know the honest truth - is their £3.5 billion subsidy going to be reallocated elsewhere?

Looking at the nfuonline.com website you wouldn’t know there was a general election going on.

The main Press Centre page - designed to provide journos searching for a farming story - carries the headline is ’NFU disappointment at another cut for dairy producers’; ‘NFU applauds Co-op’s move to back British farming’; ‘Farm income figures highlight volatility’. The only issue which farmers are urged to engage with their politicians is neonicotinoids and how a ban would affect their farm. Under ‘Campaigns’, their lead is Back British Farming, described as the NFU’s public facing campaign designed to build support and a “call to arms for the food and farming industry and government”.

No mention of a General Election. Or that farming is the industry sector which is likely to see the greatest change post Brexit. Or to tell members the period before an election is the crucial time when political candidates are forced to listen, and respond. Days before polling cannot be wasted by lobbyists as well as candidates. Here is a time when farmers can seize the chance to get the conservative party to open up and provide some insight into their thinking about agriculture. The fact that farmers have remained largely mute allows politicians to interpret their silence as an admission they are happy with what has been said. Yet as we know, nothing has been said for farming post 2020. The PM remains tight lipped and there seems little progress in negotiations since the election was announced.

There are not too many days to go. Farmers might have expected their representatives to have been less passive over this past month. Is there time for them to partly rectify this and make some demands as to the future of their industry?

There’s still time for farmers to make themselves vocal at election hustings.

“What is the Tory/Labour/Lib Dem/Ukip farming policy?”  “Are you going to a member of the party which will hang farmers out to dry?”  “What’s your personal view of farm subsidy?” “farmers need answers that go beyond 2020 and have been given nothing by any of the parties contesting this election.”

Please use 'comment' to say whether you agree or otherwise.

Please forward to friends and colleagues
Posted by farmideas at 12:33 pm 1 comment:

Have you heard one Conservative politician promise long term money for farmers? Or any Labour or Lib-Dem one come to that? There’s an ominous silence. The NFU president Meurig Raymond promises members he will “ensure that all parties fully understand and engage with the food and farming community on the issues facing the sector, both now and post-Brexit,” and once more repeats the point that “for every £1 invested, farming delivers £7.40 back to this country, and they must back British farming.”

I have my ears pricked to what Defra minister Andrea Leadsom is saying about Brexit in this 2017 election campaign, and the answer is “not much”. 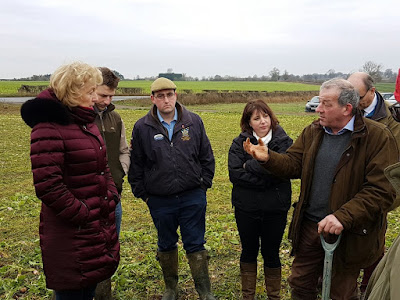 Andrea Leadsom (left) learns about cover crops from Mr Goodwin
who farms in her constituency of South Northants.

She’s keen to tell farmers they will be getting rid of the ‘red tape’ which has been a major complaint over recent years. Application forms will be simpler, and she says "By cutting the red tape that comes out of Brussels, we will free our farmers to grow more, sell more and export more great British food."  She focusses on the wrangles about what constitutes a tree; the density needed when planting hedges; the three crop rule which she calls ridiculous, as of course do many NFU farming leaders. These are promises which she can deliver on.

It’s what happens in the years after 2020 that is increasingly important. The next parliament may well run till 2022 and decisions about farm policy will need taking well before 2020. What is the likely scenario for discussion and decision over the next few highly important years.

The political timetable for farming

It looks like farming will be brushed under the carpet in the run up to election day on Thurs June 8. There’s no time or political need for farming promises, which in any event has a much reduced importance in terms of votes, partly the result of farm expansion and amalgamation. It is very unlikely that much further will be said about farming subsidies until the new government is formed.

After the election the farming debate will focus on the Brexit deal, where access to markets; cross-border trade; food regulations; tariffs will be the discussion. We are already aware that EU farm subsidies to UK farmers will end the day we leave. With the election safely behind there’s no need for Mrs Leadsom to seriously and definitively discuss these future arrangements until the treaty is concluded - she won’t know what the Brexit deal is, which will probably be late 2018.

It is at this point the bargaining over payments begins. Because farmers receive the lion’s share of EU funding to Britain, the industry can expect to be at the centre of the debate as to how much is needed for the sector to perform. If we take Owen Paterson’s claim that the UK will be better off by £9bn post Brexit (Oxford Conference Jan 2016) and that farming will get more than the £3.5bn it now receives, farmers will indeed be happy. But it is just as likely that the £9bn is an exaggeration. And equally likely that other sectors, such as health, education and defence, all which are close to crisis point, will be awarded the bulk of these EU savings.

The bleak picture is not helped by the Defra, under Paterson, saying in the last round of reform negotiations that farm payments "provide little value for money for the taxpayer”. Andrea Leadsom’s past views on farm subsidies have been no more positive. She has said there will be a "domestic successor" to Cap and a system "fit for the 21st century". Like the Cap critics of the past, she is extremely interested in productivity. She is also one of the founders of Fresh Start, a group of Conservatives demanding EU reforms which, in 2013, included in its manifesto a demand to "phase out" Pillar 1 direct payments to farmers.

What solution did Fresh Start suggest to help farmers struggling with less financial subsidies? Well, that would be a "parallel reduction in red tape and regulation" - just like the one she has announced.

Are you going to wait for it to unravel?

Writing in Management Today Dr Andrew White of the Said Business School, University of Oxford, says a ‘wait and see’ Brexit strategy is not an option for business. ‘First, we must be honest about the status quo. Many may not have wished the UK to leave the European Union, but that does not mean that life within it was perfect. Business had arguably become complacent. Many business leaders have been too content with things as they are and we have lost some of the entrepreneurial drive that creates jobs and spots new opportunities. With Brexit looming, businesses need to rediscover this drive if they are to succeed.’

Much of his comments to business apply equally to agriculture. He says good leadership stops businesses becoming passive ‘victims’ of external forces but organisations looking for better markets, products, and production methods. Being pro-active means taking action earlier rather than later, and not waiting passively until the election is passed and the deal with Europe decided.

Farm management is going to face challenges. Good, independent information and advice is an important part of the armoury. For decades farmers have been provided with free information, funded by agri suppliers and government and the EU. Free information is sponsored information, put out to encourage the receiver to do something the sponsor wants, whoever they are.

Practical Farm Ideas has no commercial, professional or government people funding it.  Readers provide the finance, through their subscription of £16.50 for the year.

Contents summary of the current issue

Index of all articles

Take out a subscription

Posted by farmideas at 1:31 pm No comments: