Farmers across Britain pull together to give essential help

Synopsis: This article suggests that farmers consider another way of helping each other. Flood prevention should involve water management in the uplands, not just where rivers overflow in the towns downstream. Management of the land which catches the rain is not difficult. Increase the water retention, or porosity of this upland grassland, and there's less water in the streams leading to swollen rivers. Running an aerator over the sward is a simple low cost solution which has the added benefit of improving grass production the following season. Water percolates into the soil instead of flowing across the surface.

Farmers are hugely generous to each other in a crisis such as floods. Wagons of forage and bedding are donated free of charge by those unaffected in the eastern counties. Local farmers use tractors to help local folk get out of trouble, and their farm diggers to clear and dredge streams. Farmers have played a huge role in the Cumbrian floods. As always, they've pulled together using their kit to clear streams of trees and other debris so the water can flow, used their diggers to clear blocked roads and dredge silt from streams and becks.

From the other side of the country there are other farmers who once again are providing wagon loads of straw and forage generously donated by people who themselves have their own problems. It's something that's not been pointed out by the media or the NFU. This help is coming from people who have been hard hit by the commodity collapse this year. All which makes their generosity even more impressive. Donating a load of silage when your own dairy herd is losing money is real generosity.

There can be nothing worse than a flooded livestock farm. Damaged and destroyed forage and bedding, livestock at risk through wet and cold, slurry and other muck getting everywhere - nothing could be more depressing. The farms most affected are those in the valley, often stocked with the housed livestock. The flood water in their yard has come off the hills of their upland neighbours, many with grazing sheep and outwintered cattle.

Readers will know that I am an enthusiast of grass aerating. Having made the spiking machine shown below in 1988, I found it made a big difference to grass yields. Cutting through the compacted top two inches so air and life could be let in, it was also discovered that, unsurprisingly, the slits allowed rainwater to soak in. This was useful when rain quickly followed slurry spreading and there was a real danger of run-off polluting a stream. In the 24 years of this magazine there have been numerous flood 'events' and each time I bring out the proposition that aerating upland grassland would reduce run-off.
Each time the message has been sent to Defra and other official bodies, but with no reaction. No doubt their staff ask "How could a simpleton without a doctorate or professorship know anything interesting, and how can an idea so simple be expected to work?". And they doubtless than go on to say that any such idea needs scientifically testing and proving.

The Facebook post on the  topic has reached 7,744 farmers and attracted comments. While half or more thought the method looked good, others said aerating would never absorb the volume of rain which fell and that anyway autumn was the wrong time to be aerating grassland. I'm not too certain that either of these objections really stand up and I've provided them with my reasoning. If the aerating job absorbed 10% of the downpour it might well be sufficient to reduce the flow sufficient to protect the farms close to the river.

Waiting for Godot - or Defra

Defra, and other government departments, often mirror Samuel Beckett's absurd play where two men wait forever for their friend Godot. On this occasion I don't think we need wait forever. Upland farmers might be galvanised to run over their land with an aerator each autumn, preparing the surface for a possible downpour, at the same time helping grass yield. The job is not particularly time sensitive and modern aerators are a whole lot wider than the 8ft I built, which could have had extending wings if I had a larger farm. Aerating could become a job which upland holdings would take a pride in doing, as important as hedge trimming.
Please send comments etc to mike@farmideas.co.uk
----------------------------------------------------------------------


The current issue of PFI magazine 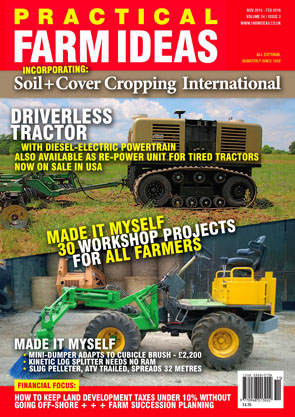 Robot milkers are catching attention, but what's the story outside the brochure? The new routine, training cows and cowmen - the experience of a recent converter.

Slug-pelleting 32 metres in one pass with the ATV sounds impossible - until you see this trailed spreader designed and built in the farm workshop.

Zero-till gets interesting with current prices. A full scale tour around one of the technique's top operators who reveals some major money saving tips on equipment, methods, and results. Read it!

Tractor service intervals are getting longer. Will they save oil and cost more in wear?

Driverless, cabless tractors are in the USA and doubtless will soon be here. Driven by diesel-electric power unit/s as described below.

Mini dumper makes cubicle brush - and then converts back in the summer for site work.

Financial Focus:  How to Limit Tax on Developing Land to just 10% Through Planning and Knowledge. Read now, plan with care, reap benefit later.

Renew now while copies last. All who respond before Dec 17 get a FREE back issue  Don't subscribe yet? Choose your subscription plan from here. £16.50/year p+p inc.

PS If you have an idea for editorial, or need a speaker for your farm discussion group, please get in touch. If you want pictures of something, or anything else, such as pics of something we have had in the magazine. And do let your fellow farmers know about Practical Farm Ideas - which many farmers tell me is the best magazine they get.
Posted by farmideas at 3:01 pm 5 comments: